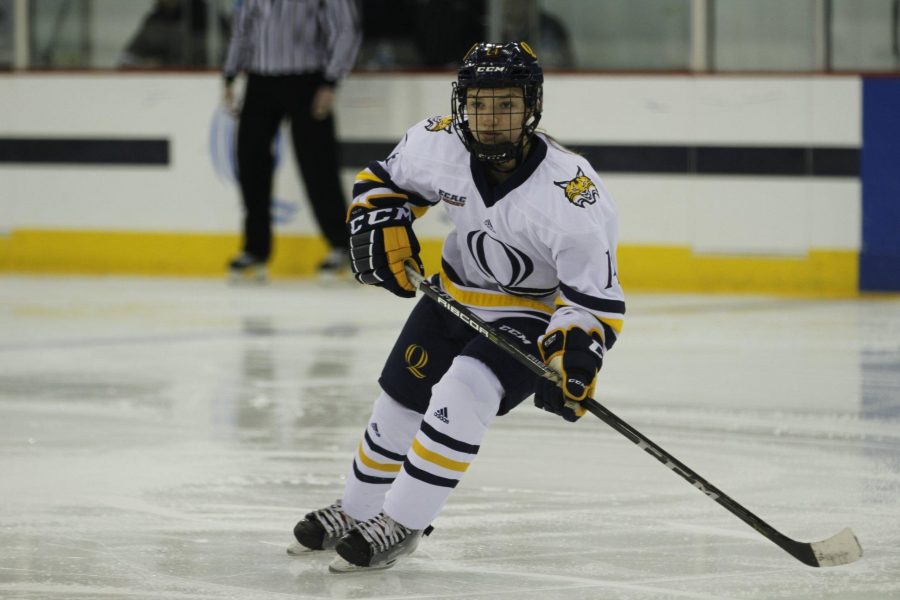 The Quinnipiac women’s ice hockey team (11-16-4, 8-9-2 ECAC Hockey) heads into Saturday’s matchup against Union with three ECAC Hockey games remaining. Coming off a huge 4-0 win over RPI on Friday night, the Bobcats improved to 8-9-2 in the conference and sit in the eighth spot in the standings as the final playoff team as of now. Union (4-25-2, 2-16-1 ECAC Hockey) sits in the cellar of the standings, with a horrid conference record and coming to Hamden fresh off a 4-1 loss to Princeton. Quinnipiac can almost guarantee to lock up a playoff spot with a win Saturday, while Union will look to spoil Quinnipiac’s chance of clinching.

One of five seniors who will be celebrated on Saturday’s Senior Day, Marcon has had a fairly quiet 2018-19. However, she’s been hot of late, riding a four-game point streak where she has three goals and an assist during that span.  She’ll be skating in possibly her final game in Hamden, so look out for Marcon to continue the hot streak and light up the score sheet.

While the Dutchwomen have been struggling, one of the brighter spots this season has been Heiting. She scored two goals last weekend in the win against Dartmouth and scored the lone goal against Princeton on Friday. She now leads the team in goals with five and is third on the team in points with 10. With a strong Quinnipiac defense, Union will need players like Heiting to be on their A-game if it wants to generate any offense.

Keys to the Game

Quinnipiac – Capitalize on a weak defense

Some of Quinnipiac’s biggest struggles this season have been on the offensive side. The team is averaging less than two goals per game (1.93), which puts the Bobcats at eighth in ECAC Hockey in that category. However, Quinnipiac is going up against one of the worst defensive teams in the conference. Union has allowed an average of 3.53 goals per game this season, the second-worst GAA record in the conference. Quinnipiac has scored four goals in three out of its last four matches and needs to continue the offensive touch against Union.

One of the hardest things to do in college hockey is to string together two well played games on the weekends of back-to-backs. Quinnipiac played one of its better games on the season Friday against RPI, a team the Bobcats are trying to catch in the standings. So to come off that big victory and play the last place team the next night, Quinnipiac might be coming in with a cocky mindset. Union needs to jump on Quinnipiac early and establish that this won’t be an easy game to play and that it will be down to the final buzzer.

Tune into the broadcast of the women’s ice hockey game between Quinnipiac and Union at the People’s United Center at 3 p.m. on Saturday. On the call will be Steven Pappas and Bryan Murphy. Follow @QBSN on Twitter to get updates on the game.