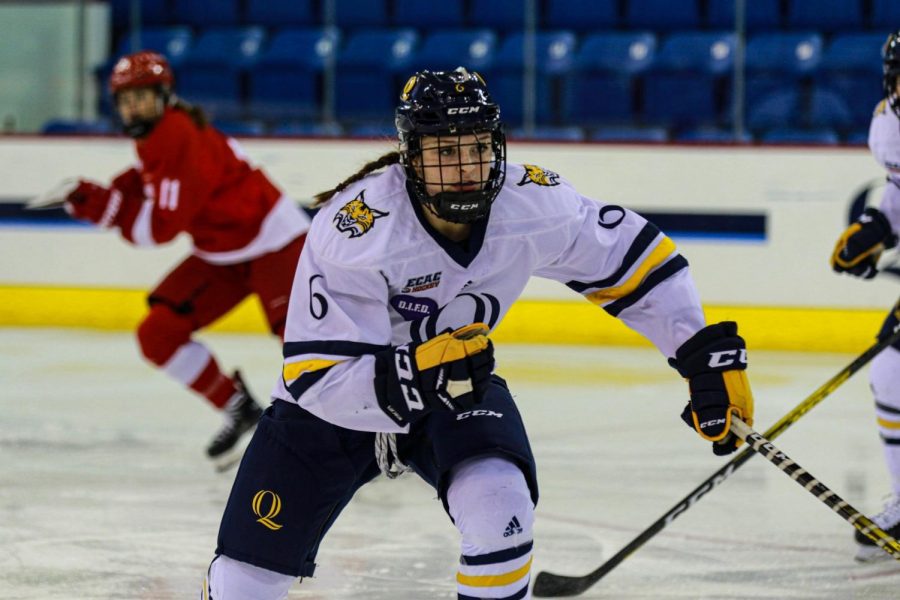 The loss was Quinnipiac’s first at the People’s United Center all season, following five straight victories on home ice.

“It’s interesting. We lost, but I’m really proud of our team, I think we played well.” said head coach Cass Turner. “We put a lot of pucks on net today, and their goalie played tremendously, and we couldn’t finish. It’s an important weekend for us, and I think we started to understand how fast we can play.”

FINAL: #10 Clarkson takes the win as they split the weekend series against the Bobcats.

Michelle Pasiechnyk had a stellar outing stopping 42 shots while the Clarkson defense blocked 17 shots in the win.

Sunday’s matinee saw Clarkson get the upper hand early, in contrast to Quinnipiac’s victory on Saturday, where the offense opened deep in the third period. After 15 minutes of back-and-forth hockey, Clarkson’s Sena Hanson was able to jam the puck past QU netminder Logan Angers to put the Golden Knights ahead 1-0.

“It’s always tough when you don’t score first. There’s certainly an advantage for whoever gets that first goal,” Turner said. “I think particularly in a Quinnipiac-Clarkson game, they’re always tight.”

Throughout the game, Quinnipiac received several power play opportunities to even up the score but did not capitalize on any of their five chances.

“We got some good chances, we didn’t finish,” Turner said. “[Clarkson goalie Michelle Pasiechnyk] played well, but I also think that we can put ourselves in better positions to score goals. We have some things we need to sort through on our special teams. We need to be sure we get the right combinations moving forward.”

Pasiechnyk continued her strong play from Saturday, stopping 42 Quinnipiac shots throughout the game. Angers also had a solid performance in defeat by making 20 saves.

Sunday’s game saw Quinnipiac outshoot Clarkson 43-23, but despite this abundance, the Bobcats were largely unable to solve the Golden Knights.

“It’s always good to have that quantity to keep the goalie on her toes, and in those times, we want to take it to the net because that makes the goalie more nervous,” Grace Markey said. “The closer we get, the more we have crashing the net, it will go in more.”

With five minutes to go in the second period, Clarkson’s Gabrielle David found the back of the net to extend the Golden Knights lead to 2-0.

In the opening minutes of the third period, Golden Knights defenseman Avery Mitchell scored in 4-on-4 action, giving Clarkson a commanding 3-0 edge.

However, the Bobcats responded a minute later when Alexa Hoskin shot from the point, generating a rebound chance for Renee Saltness. The senior forward buried the puck for her third goal of the season, making the score 3-1.

“We gotta get goalies like that moving,” Turner said. “You saw that on [Saltness]’s goal, we were able to get a shot from the point, and she had to move. She couldn’t see, and all of a sudden your rebound is so different.”

Quinnipiac attempted to mount a late comeback, but after pulling Angers in the closing minutes of the third and skating 6-on-4 via a late powerplay, the Bobcats were not able to catch up with Clarkson’s lead.

Up next, Quinnipiac is scheduled for four straight games against St. Lawrence as they look to get back on track in ECAC Hockey. That first contest will be at home next Saturday at 2 p.m.

“We have our eyes on the prize for the end of the season,” Markey said. “We’re going to keep chipping away at practice, and we have our set goals in mind that we want to achieve.