Bobcats close out regular season with big win over Colgate 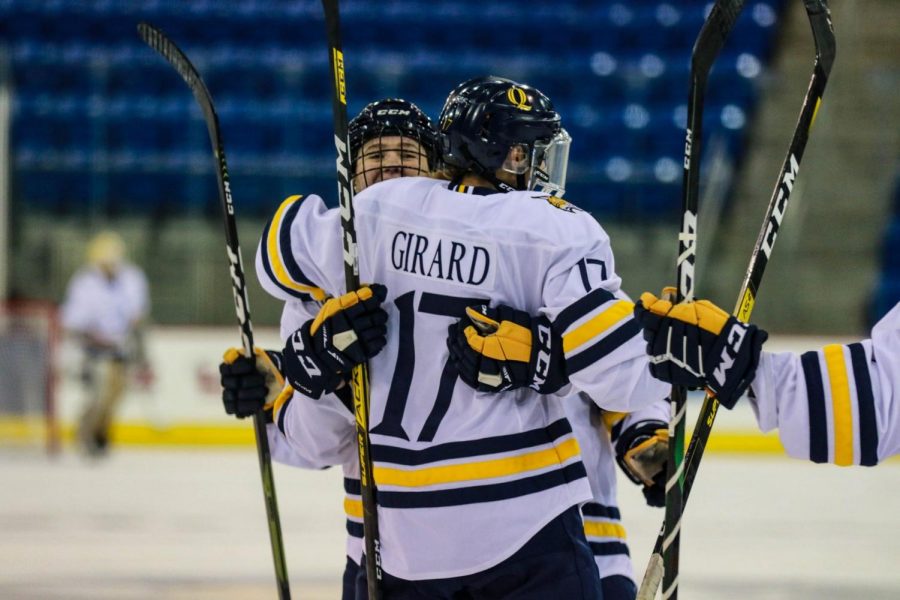 The Quinnipiac Bobcats (10-5) wrapped up their regular season by defeating the Colgate Raiders (13-6-1) for the first time this season. The 5-3 victory was the final game in the Bobcats’ regular season.

The first period was defined by its fast pace of play, with only nine faceoffs throughout the entire period. It wasn’t until the second half of the period that the game opened up.

Less than a minute after Quinnipiac’s first power play of the game, Taylor Girard found the back of the net for the third straight game, her seventh on the year.

Whatever Quinnipiac head coach Cassandra Turner said during the first intermission, it worked.

At the 9:43 mark of the 2nd period, the Bobcats scored a picture-perfect goal.

Olivia Mobley fought off two different Colgate defenders along the glass, sent a backhanded pass to Taylor House, who sent a one-time pass to Grace Markey. Markey took advantage of being alone in front of the net for her 4th goal of the season.

Just two minutes later, Laura Lundblad received a pass in the neutral zone from Courtney Vorster, forcing Colgate to defend a two on one situation before launching the puck into the top right corner.

With 2:05 left in the period, Colgate’s Kalty Kaltounkova was called for a body check and gave Quinnipiac its second power play of the day.

Twenty-two seconds into the power play, Taylor House found the back of the net after Olivia Mobley won the puck in the neutral zone and passed it to Alexa Hoskin, who found a wide-open House for the Bobcats’ third goal of the period.

Before the end of the period, the Raiders would get one back. Twenty-two seconds after the Bobcats went ahead 4-0, Taylor Kirwan won the puck in the Quinnipiac zone and laid it off for Sammy Smigliani, who found the back of the net for her sixth goal of the season.

The majority of the third period served as a microcosm of what happened in the game up to that point.

Bobcats goalie Logan Angers was peppered with shots throughout the period and held her own. She withstood two different Colgate power plays and had 21 saves in the third period alone.

With four minutes left in the third period, Colgate head coach Greg Fargo pulled the goalie to give the Raiders a one-skater advantage.

That decision would pay off for the Raiders.

With 1:45 remaining in the period, Lexie Adzija lost the puck Quinnipiac’s defensive zone, allowing for Colgate’s Danielle Serdachny to put it past Angers, bringing the Raiders within two goals.

Just over a minute later, Serdachny picked up yet another loose puck in the Bobcats zone and ripped a shot from the blue line into the top left corner of the net to make it a one-goal game.

Two goals in 69 seconds and the Raiders were down one goal with under a minute to play.

However, with 13 seconds remaining in the period, Brooke Bonsteel scored an empty-net goal to put the game out of reach and seal the 5-3 victory over the Raiders.

“Part of our plan is to get better with every game we play. We got better today. This is part of our process,” Turner said. “There are so many things to get better in and that’s what we’ll work on heading into the playoffs.”

Depending on the results of their two remaining games on Sunday and Monday, Clarkson or St. Lawrence will be Quinnipiac’s opponent in the ECAC Hockey tournament.

Regardless of the opponent, Turner is confident that the Bobcats have grown enough throughout the season to peak at the right time.

“Anyone who’s been watching us all year sees the pieces grow. We’re putting more pieces together and just trying to stay on track,” Turner said. “We want to play our best hockey. We’re going to prepare for whoever we play against. It’s all really familiar. Now that we’ve beaten Colgate, we’ve beaten every team we played.”

The Bobcats’ semi-final matchup will take place on March 5, regardless of their opponent. The ECAC Hockey final will be held on Sunday, March 7.