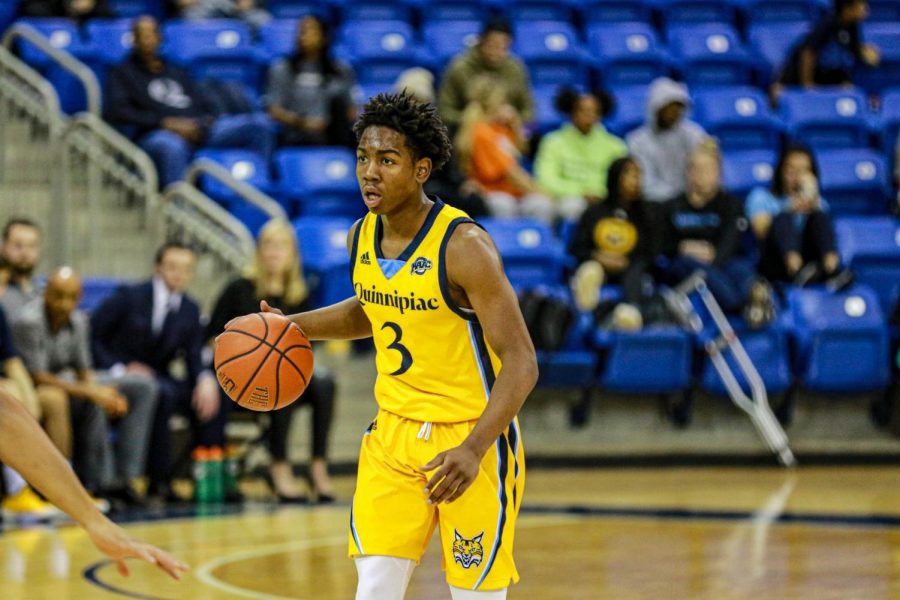 The Bobcats came into the game with two wins behind them and were looking to prove a point in today’s matchup against Rider. With the win, Quinnipiac climbed two spots in the MAAC standings and now sit eighth in the conference.

Luis Kortright is on another planet.

The first year guard already has his season high in points (23), rebounds (5) and is matching his best shooting performance since 2/7/21 vs Fairfield. pic.twitter.com/MXUc4wYXEb

The Bobcats came out of the gate strong and carried the momentum throughout the entire game, never allowing Rider any chance at grabbing the lead.

Up by 25 points at halftime, the Bobcats were determined not to let off the gas.

“We’re tired of coming out of the second half flat,” Kortright said. “Today we just said, ‘We’re not going to have it,’ so we kept talking to each other and motivating each other. That’s what made us have a great second half.”

Nine players scored for Quinnipiac in the game, including more than 50 points from the bench.

Head coach Baker Dunleavy was happy with the team’s performance, especially coming off of a hard battle the day before.

“We have some skilled and sound players. I think it was our most unselfish game of the year,” Dunleavy said. “It’s a fun group to watch when they’re clicking offensively.”

Sophomore guard McGuire tallied 17 points on 6-8 shooting from the floor and a perfect day at the free throw line. However, McGuire believes that the team’s improved defense has been the real key to the turnaround.

“It was tough losing three games in a row,” McGuire said. “But once you get on a roll and everyone started playing with confidence, we started focusing on our defense and let the offense come to us.”

The Bobcats have had a younger team this season than in past years, and continued improvement from the young core of Kortright, Chenery and Savion Lewis has helped drive the Bobcats this season. Dunleavy feels the team has a strong future ahead if they continue to learn.

“We have smart, high-character guys that want to learn from experience” Dunleavy said. “It’s about what’s inside of the players.”

The Bobcats look to continue their winning streak against Saint Peter’s on Wednesday at 4 p.m.