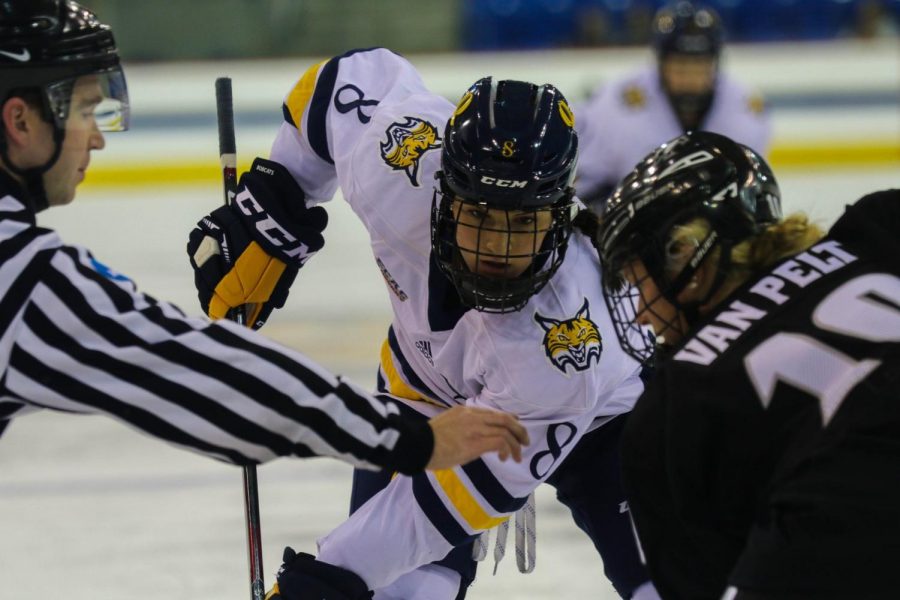 The Quinnipiac Bobcats (7-3-0) wrapped up the non-conference portion of their schedule by defeating the Sacred Heart Pioneers (0-4-0) in a dominating 6-0 performance at the People’s United Center in Hamden, CT.

Renee Saltness opened the Bobcats’ scoring rather quickly, with her sixth goal of the season coming just 30 seconds into the game.

The Bobcats didn’t even let the Pioneers in today. They showed their prowess on the ice heading into next weekends showdown with Colgate! pic.twitter.com/iE1fVkTNwI

The scoring didn’t stop there. Eleven minutes later, Kendall Cooper found the back of the net for her 4th goal of the year.

After a single period of play, it was clear that the Bobcats’ offense was firing on all cylinders.

“It was nice to have scoring from different lines and have a balanced attack,” Bobcats head coach Cassandra Turner said.

The diversity in lines was reflected in the box score, as six different Bobcats found a way to put the puck in the back of the net.

Olivia Mobley and Taylor House both scored goals in the second period while Courtney Vorster and Nina Steigaufgot on the score sheet with a goal each in the 3rd period.

Even though the goals were bountiful, Coach Turner sees more room for improvement.

“I don’t think we hit everything that we were looking to accomplish. I’d love to see us continue to take more pucks to the net off face-offs,” said Turner. “We talk about every play matters, those little things make a big difference.”

While the 6-0 scoreline is a dominant one, the end result could have been larger. The Bobcats went 0-4 on power-plays, extending their power-play drought to 0-12 in their last 12 attempts.

After going 0-3 on power plays in the second period, the Bobcats responded with a lively attempt in the third period. They went from simply passing the puck around, to moving the puck with a sense of purpose. Even though they didn’t score, Turner liked what she saw.

“I actually really liked how our power play pushed through today and began to create different looks,” Turner said. “Looks are good, but pucks need to be in the back of the net.”

While replicating a six-goal, 99 shot performance is unlikely, it’s that kind of offensive confidence that the Bobcats need to have in order to finish the rest of their conference schedule on a high note.

The Bobcats return to the People’s United Center next weekend for two games against Colgate as they make a return to ECAC Hockey play. The series begins next Saturday at 2 P.M.

“We’ve got to play with confidence,” Turner said. “Any game at this point is a playoff game. We’re gonna be who we are and be better than the other team at that.