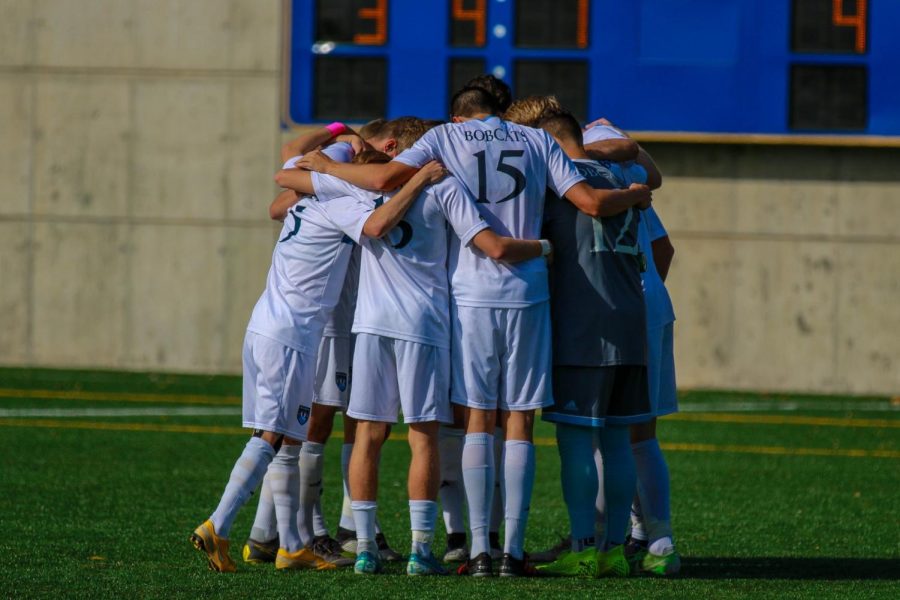 The Quinnipiac men’s soccer team (6-1) took on the Siena Saints (2-5-1) on Sunday to move on to the semifinals, with the Bobcats winning it 1-0 on a rainy day in Hamden.

After an incredibly different season for all athletes, the Bobcats took to the field for the end-all-be-all game of the season and they know that 1-0 win well, with two such score lines going in their favor earlier this season.

It was a slow start for both teams as 45 minutes went by without any score. The Bobcats dominantly outshot the Saints 8-3 in the first half of the game.

Heading into the second half, the Bobcats offense picked up as they outshot the Saints 16-2.

“I thought that they [the Bobcats] handled it really well in the second half,” head coach Eric Da Costa said. “They dominated play and created some good opportunities… They just kept right on going”

With just 13 minutes left, a quick pass from Domen Bozic to the feet of David Bercedo snuck one past Siena goalie Greg Monroe. Bercedo got it to the left side of the goal just out of reach for Monroe.

The sophomore forward’s third goal of the season was a huge one for the Bobcats, who were finally able to break through what was a stonewall Saints defense for most of the game.

That would be all they wrote as Siena was not able to come back before the final buzzer.

Brage Aasen and Tomas Svecula both tallied 5 shots each for the Bobcats. That goes to show how strong Siena’s defense was throughout the game.

The Bobcats need to continue to create and take advantage of the opportunities they have heading into the semifinals. The takeaway from this game is that when the opportunity is there, they need to strike.

“I saw a really professional performance from them,” Da Costa said. “Siena came out and attacked really high in the first half. We had to be brave across the backline and reliable. I saw great composure from them. It’s the only sport you can dominate the ball and create a lot of chances and walk away losing the game.”

The Bobcats have home-field advantage throughout the MAAC tournament. They’ve won all four of their home games this season, so it really is an advantage to play at home in front of those cheering fans.

“You always have some comfort playing at home,” Da Costa said. “We used that little bit as a beacon of focus for us. We hope we give them [the Quinnipiac Community] something to be proud about and a little bit of joy.”

The Bobcats now have a date with in-state rivals Fairfield in the MAAC semifinals on April 14.