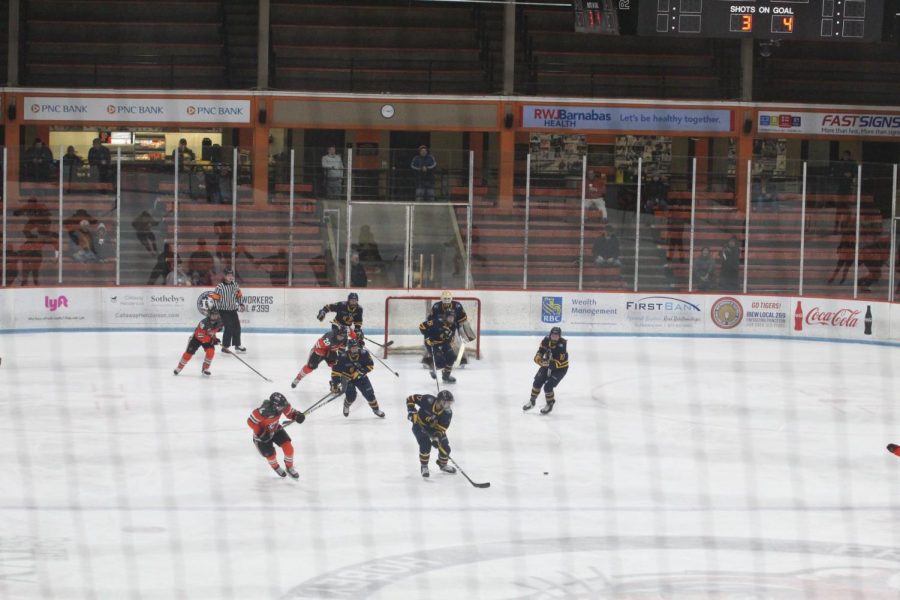 The Quinnipiac Women’s Ice Hockey beat the Long Island University Sharks by a final score of 9-1, extending the winning streak for the Bobcats to three. The Bobcats take on LIU in a rematch Saturday afternoon at 3pm.

LIU’s Megan Roe found herself sitting in the penalty box 56 seconds into the opening period, watching her team in a shorthanded situation. Quinnipiac was able to put four shots on net but came up empty-handed.

Following the penalty to Roe, Olivia Mobley followed her shot on net for a rebound to break the ice and put the Bobcats up 1-0 early into the game. It took just three minutes for the Sharks to respond as Carrigan Umpherville was able to beat Corinne Schroeder over the shoulder to put home the only Sharks goal of the night.

In a tight 1-1 tie, LIU found themselves shorthanded with too many players on the ice. The Bobcats were able to redeem themselves as Mobley found the back of the net yet again to break the tie and put the Bobcats ahead 2-1 on a powerplay goal.

In the second period, Mobley was able to clean up a Lexie Adzija shot and score her first college hat trick.

“It was unreal,” said Mobley. “Last year, not having scored until halfway through the season and coming out the second week of our season, and being able to score three goals was unreal.”

A little over five minutes into the second period, Sadie Peart threw the puck on net that trickled through Sharks goalie Kenzie Harmison. The second period was a low shooting period and Schroeder was able to defend the goal and stop all five shots that came her way.

The third period saw more pressure put on by Quinnipiac when Adzija was able to score on a Jessica Schryver shot to extend the lead 7-1 in favor of the Bobcats. Five minutes after her first goal, Adzija scored in a four-on-four situation as the senior forward received a stretch pass up the middle of the ice from sophomore defenseman Maddy Samoskevic.

The night ended up becoming a multipoint night for Adzija.

“It’s something we talked a lot about as a team this year,” Adzija said. “We talked about the race to three goals and how important it is. Once you get to three, there is always more.”

Three other Bobcats were able to finish the night with multiple points, outshooting their opponents 52-12.

Head coach Cassandra Turner said, “we want to win the puck back quickly, we attack, we want to be first to the puck.” Turner praised her team by saying “they did a really nice job with that today.”

The end of the third period saw a Kate Huntington offensive zone faceoff win create a scoring opportunity for a Renee Saltnes wrist shot in the slot to beat Harmison over the blocker side, top shelf, to cap a night of goal scoring making the final score 9-1 for the Bobcats.

The Bobcats remain undefeated and will host the second and final game against the Sharks on Saturday, Oct. 2.