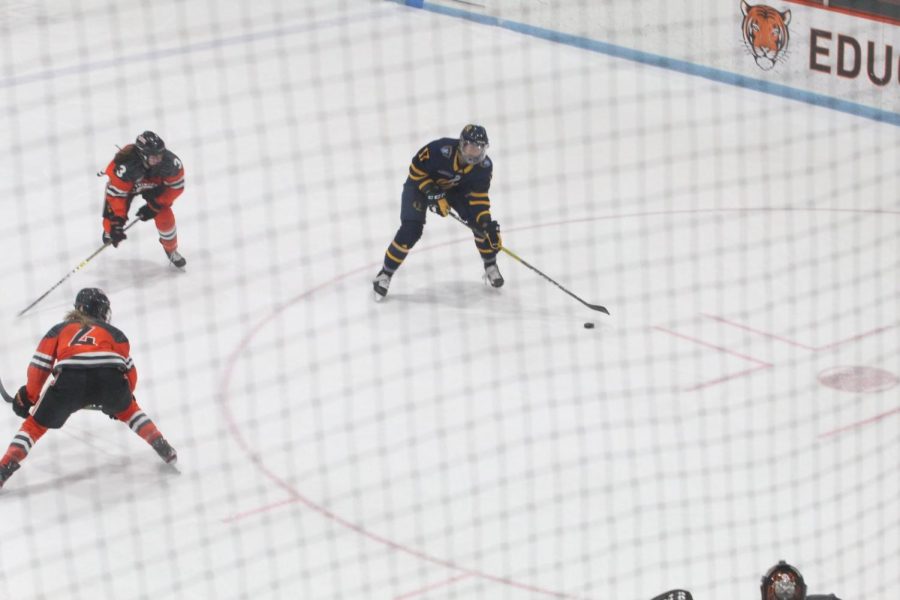 The undefeated Quinnipiac Bobcats took on the Saint Anselm Hawks for game two of the series, hoping to stay undefeated for six straight games for the first time since 2010.

Some broken sticks and a lot of fire from both offenses started the first period off. While not much action happened in the realm of scoring, the Bobcats came flying out of the gate out shooting the Hawks 15-3.

The feeling in the arena was a lot more aggressive than the game last night. The Hawks came out looking for revenge after losing by only one last night. Past Quinnipiac goalie, Allie Kelley, was a brick wall throughout the first period keeping out all 15 shots from the dominate Quinnipiac offense.

“It was pretty bittersweet playing against her,” Alexa Hoskins said about her friend and previous teammate. “I’m just happy that she is being successful where she is and happy where she is.”

Heading into the second period, junior forward Sadie Peart, grabbed her sixth goal of the season. Scoring two goals last night, Peart put the Bobcats on the scoreboard to lead 1-0 against the Hawks. In attempting to stop the goal, Kelley managed to get herself a penalty for tripping, giving the Bobcats a man-up advantage.

Just when the teams thought the period was done, Hoskins decided to tack on another goal off a rebound from Ann-Frederik Naud and Zoe Boyd with just 30 seconds left to go.

The Bobcats offense never stopped putting the pressure on the Hawks. Eight and a half minutes into the third, the offense for the Bobcats really clicked.

“We stayed really committed to the things we wanted to do on offense,” head coach Cassandra Turner said. “We created a lot of rebounds, and we were rewarded with goals. I think our team is in a good place. They feel confident and I think they’re hungry now to attack the season.”

Lexie Adzija got a hold of the puck, attempting to skate through the crowd in front of the net, but tripped up and sent the puck straight to the stick of Olivia Mobley. Mobley sent it straight through the crowd and into the net past Kelley to put the Bobcats at a solid 3-0 lead.

“As soon as I saw Lexie (Adzija) get the puck, I just thought I should go up to the net because more often than not it gets to the net, so I figured start skating,” Mobley said about her goal. “Hopefully the puck will bounce and go in, or an opportunity will come. Fortunately, it did so that was fun.”

The Bobcats weren’t done there as Kendall Cooper found her way through the jumble in front of the net to post her first goal of the season less than a minute after the goal by Mobley.

That would be all she wrote for Kelley’s time playing against Quinnipiac in this series as the Hawks sent in Annabella Lalande to finish it in net.

The Bobcats had five different skaters to post up a goal today. It has been a consistent thing throughout the past six games to have multiple different players grab goals, which is a good sign for Quinnipiac heading into the rest of the season. The more players to be able to score, the better the chances the Bobcats will have to be able to win games.

“We’re a team that celebrates each other’s successes very well so it’s not really a selfish environment,” Hoskins said. “I think that’s what is allowing us to be successful right now.”

“We always want play for the girl next to ya,” Mobley said. “It’s never about the ‘I’, it’s always about the team. We stressed that a ton this season.”

The last time the Bobcats won this many games to start the season was in 2010 with a six game undefeated streak.

“Anytime you can figure out how to win, early on every team is going to make some mistakes they won’t make later in the year,” Turner said about remaining undefeated. “It’s really nice when you can find those key momentum moments and moments to score goals.”

The Bobcats will play Providence next weekend and look to beat that record and move on to 7-0 for the season.