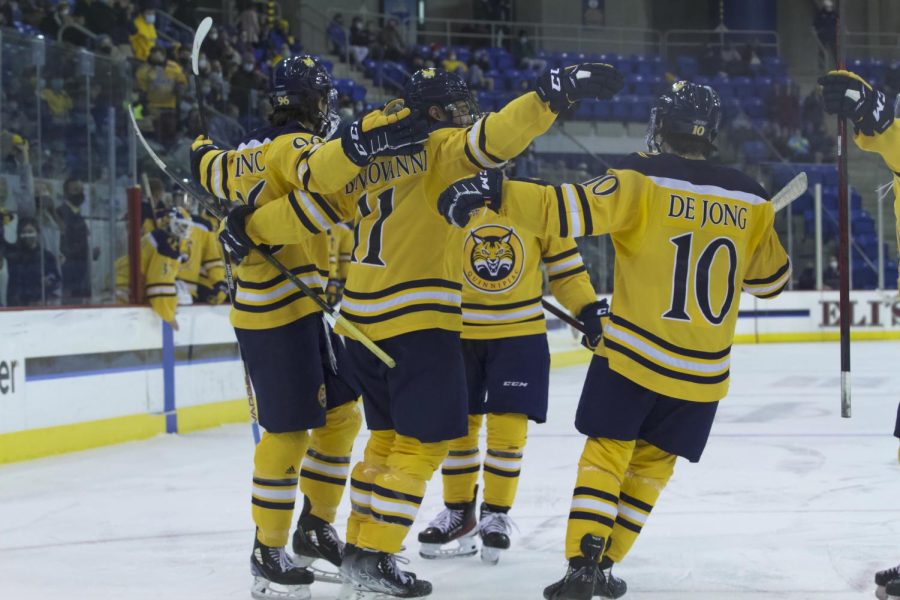 Quinnipiac traveled to Ithaca, NY about a month ago for their first matchup against Cornell. The game was close throughout, but the Big Red ended up edging the Bobcats in overtime. Cornell played “spoiler” as it took down the No. 1 team in the country at the time.

It was no difference at the People’s United Center on Friday with Cornell playing the role of spoiler once again.

Four minutes into the first period, the Big Red had already been handed opportunities by the Bobcats. Quinnipiac defenseman Ilvari Rasanen was called to the penalty box for holding, which set up a Big Red power-play.

Cornell did not waste its time with the man advantage and quickly generated its offensive attack.

Defenseman Travis Mitchell sent a rocket shot towards goalie Yaniv Perets. Right before Perets had a chance to save it, Jack Malone redirected the shot to the top shelf of the net for the goal. Within the sequence of events, Malone was credited with his eighth goal of the season and gave the Big Red an early lead.

From there on out, the Bobcats struggled to find a way to put themselves back within the game.

Quinnipiac mustered 42 shots on goal throughout the contest but could not get any of the pucks past Cornell’s Ian Shane. Shane had an incredible night at the net as he saved all 42 of the Bobcats’ shots on goal.

“I thought Cornell was really good,” head coach Rand Pecknold said. “Their goaltender was outstanding…we peppered them, and he made save after save.”

As the night played out, players on both sides of the ice were expressing the rivalry between each other. Players were throwing punches, pushing, and jawing at one another on almost every play.

However, with time winding down and Quinnipiac still looking to tie the game, all tension between the sides throughout escalated into an all-out brawl.

After winning the faceoff, Cornell held the puck against the boards. The Bobcats pushed the Big Red players in an attempt to free the puck, but Cornell was able to keep the puck out of reach, giving the Big Red the victory.

As soon as the siren sounded, each skater on the ice went after the other. Players were punched, tackled, and put in headlocks, with some players even losing their helmets.

Despite all of the chaos that ensued, Pecknold was proud of his guys’ effort.

“I thought our guys played really well,” Pecknold said. “We played great, that was one of our better games of the year and we just could not score.”

The Bobcats will have to quickly get this loss out of their mind as they turn their attention to Colgate. The game takes place tomorrow night at the People’s United Center at 7:00 PM. With a win or an overtime game against Colgate, the Bobcats will clinch the #1 seed in ECAC Hockey along with the Cleary Cup.