St. Cloudy with a Chance of Offensive Prowess: Bobcats advance and will face Michigan on Sunday 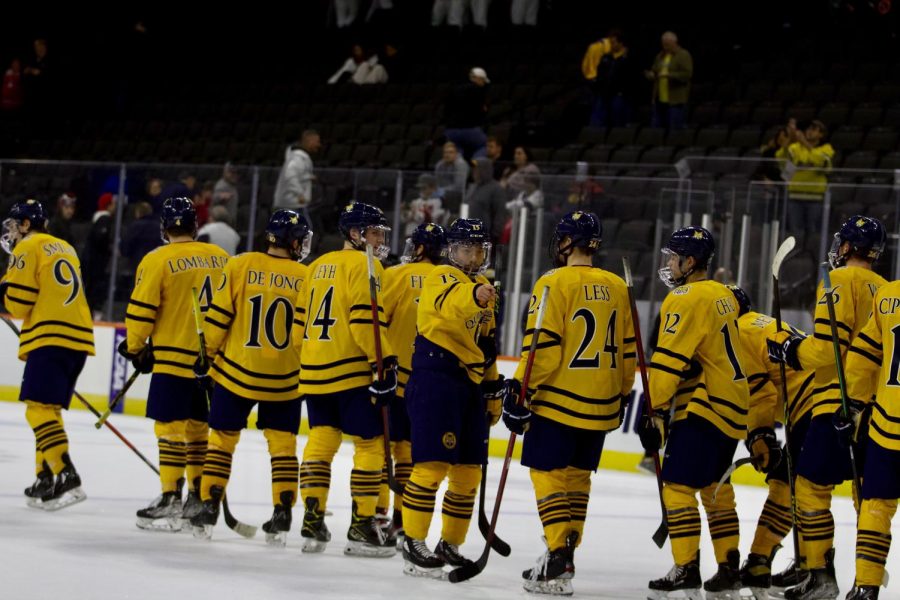 After going out in the first round of NCAA play last year and losing the ECAC title game last week, Quinnipiac eliminated St. Cloud 5-4 and is heading to the Regional Finals against Michigan on Sunday for the first time since 2019.

A quick back and forth game slowly ran in the Bobcats’ favor as Brendan Less, off the quick pass from Zach Metsa off the rebound, scooped a slider passed SCSU goaltender Jaxon Castor, and grabbed an early 1-0 Bobcat lead.

With just over 2:30 left in the period, TJ Friedmann got a quick breakaway shot where he weaved through three separate St. Cloud defenders and took a top shelf shot from the corner.

That was all she wrote for the first period as the Bobcats led 2-0 heading into the second.

It was like a complete 180 for the second period. The roles reversed on the offensive side and the Huskies came out swinging.

In just a minute and eight seconds, the Huskies finally put themselves on the board with a goal from Nolan Walker off the rebound from Sam Hentges.

It was almost like déjà vu but the opposite as, six minutes later, Walker fed the puck to Hentges to tie the game up at two.

From there on, it was just a back and forth between the teams with goals from Michael Lombardi and Kyler Kupka bringing the score to 3-3 as they headed to the locker room.

“It’s a play we’ve run all year,” Lombardi said about his goal. “I just tried to take the goalie’s eyes and Ethan (De Jong) made a great play to the net and I was just lucky enough to get it off the shin and get a good bounce.”

The Bobcats found their steam again in the third period when, off the opening faceoff, Griffin Mendel shot from the blue line corner grabbing a 4-3 Bobcat lead in just the first 27 seconds of the period.

“I was pretty cold coming into the playoffs so it’s always really nice to be able to contribute what I can,” Mendel said.

To really rub salt in the wound and seal the deal, Mendel shot a quick pass to Jayden Lee from the “Michigan Zone” who made a tough shot from his knees. Lee was accredited with the game winning goal as the Bobcats led 5-3 with 11 minutes left to play.

The Huskies pulled Castor to try to get some offense moving and were able to put one up with a goal from Walker, his second of the game.

That would do it for the Huskies as their season ended in a close 5-4 loss to Quinnipiac.

“I don’t have much of a statement other than I’m really proud of these guys. Really proud,” Huskies head coach Brett Larson said.

Despite advancing in the NCAA Tournament, Quinnipiac head coach Rand Pecknold was disappointed overall with his team’s effort on Friday night, especially on the defensive end.

“Some of the guys we left open two-on-ones,” Pecknold said. “That’s not how we played the last 40 games.”

He feels his team will certainly need to improve in Quinnipiac’s next game against one-seeded Michigan on Sunday at 6:30 p.m.

“Michigan, they’re impressive,” Pecknold said. “With the talent package they put together, I think for us, first thing we need to do is play better. We need to play our identity. We did not do that today.”